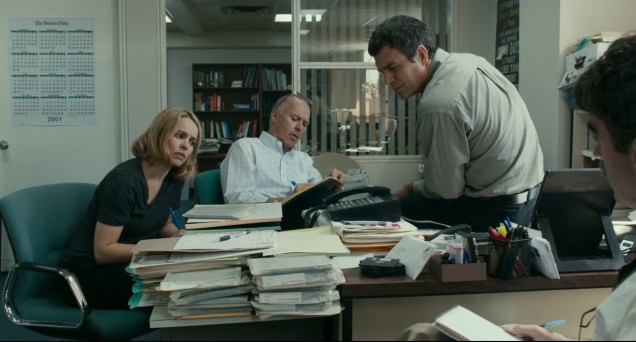 Spotlight, the new film by Tom McCarthy, isn’t just an engrossing piece of cinema, and it isn’t just an Oscar contender. It’s also one of the best movies about investigative journalism since All the President’s Men. Both movies are tightly-focused narratives about intrepid reporters that task themselves with exposing corruption inside systems that are supposed to trade upon supreme trust. In Spotlight, instead of Woodward, Bernstein, Watergate and Nixon, it’s Boston Globe journalists who discover the horrifying fact that the Boston Catholic Church covered up numerous acts of child sexual abuse within their own clergy for decades. This is based on a true story, of course. And it is a film single-minded in its devotion to chronicling the nuts and bolts of hardcore reporting. Like Woodward and Bernstein, the Spotlight team (which operates out of the Globe basement discreetly and is unburdened by deadlines) eventually pound the pavement and navigate through an endless thicket of notes, documents, clues, interviews, suspects, victims, breakthroughs, frustrations, informants, stonewalls, assurances and threats.

The movie is a dedicated and poignant ode to that type of job. It enlists no silly subplots, and no extraneous characters. When Spotlight digs into the personal lives of its central reporters, it is to reflect on how the story directly affects them. How could it not? The 2001-era Boston shown in Spotlight is a tightly-knit town, one where church is completely intertwined with community, secrets are well-kept, and betrayals are keenly felt. The four Spotlight reporters uncovering this corruption were raised Catholic, and they went to the same schools and masses as the growing list of victims. Some of our key players are now lapsed Catholics, but it barely matters: to learn these truths is to experience a crisis of a faith they forgot they had. When Spotlight team lead Robby Robinson (Michael Keaton) visits his old elementary school and a teacher hides behind cold lawyer-talk, Robby’s bitter final line says it all: “I guess we were the lucky ones, huh?” At one moment, an informant estimates that six percent of Boston clergy (ninety priests) are guilty of abuse, and his figure is proven to be staggeringly, incredibly accurate. And as we know, this story continues to grow to this day.

Boston is so clandestine, argues Spotlight, that this story only revealed itself because Marty Baron (Liev Schrieber), an outsider both by geography (Miami) and religion (Jewish) took over as Globe editor and saw a thread he couldn’t help but tug. The Spotlight team knew about abuse stories and saw a possibly bigger conspiracy, but Baron, coming in as the threat of layoffs hang in the air, saw potential and pushed the team into a devastating piece of journalism. Another outsider, a cantankerous Armenian lawyer named Mitchell Garebedian (Stanley Tucci) supplies crucial information. It’s eventually revealed that some of this information was shared before with the Globe, to no avail. Some of it is, shockingly, public information. Some of it involves lawyers and suspects that can’t even keep their mouths shut. And soon enough the Spotlight team must choose between running an incomplete story that will summon the church’s damage control, or sitting on it and risking another paper running the same information and butchering it. The story’s momentum is persuasive and thrilling.

Spotlight is refreshingly even-handed. It sees the church as an institution that can do good, but simply has not done so here. During one staggering sequence, we cut between two separate interviews detailing graphic sexual abuse, with editing carefully used to exercise restraint (without making things too vague). The other Spotlight team members (Mark Ruffalo, Rachel McAdams, Brian d’Arcy James) gradually become aware of the scope of this story and have to contend with what it does to their lives. McAdams knows it will destroy her religious mother. Ruffalo loses his already-strained faith. James, a father, is shocked to learn that a church’s halfway house for recirculated priests is two blocks from his home. And Keaton’s Robinson wrestles with unimaginable guilt and provides the movie’s emotional lynchpin.

It’s so rare these days to see such a well-made film for adults. Spotlight is one of the year’s very best.