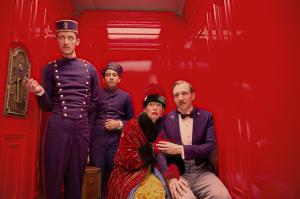 Director Wes Anderson has always been a filmmaker of distinct pleasures. Like a sunnier, wiser Tim Burton, he populates his movies with characters of specific peculiarity, and places them within enchanting storybook environs. Through it all he strikes an intoxicating balance of whimsy and sadness, from the soft dark comedy of Royal Tennenbaums to the dying embers of immaturity that fuel Moonrise Kingdom. In his newest, The Grand Budapest Hotel, he tops himself. Here is a beautiful, hilarious, exhilarating fantasy, a confection as sweet as the pastries that function as a plot point—or for that matter, as luscious as the titular hotel itself, with its pink walls and frilly décor that resemble a giant birthday cake.

At its center is a delightful performance by Ralph Fiennes, one of his very best. Effete, intelligent, fussy, intellectual, lustful, Gustave (Fiennes) rules the Grand Budapest, a bastion of 1930s civility within a fictional eastern European country, with a velvet fist. As seen through the eyes of the Budapest’s new, probationary lobby boy Zero (Tony Revolori), Gustav prides himself on knowing customers’ needs and servicing them, in multiple ways: he has a weakness for satisfying wealthy dowagers sexually, and they have a weakness for him. When Gustave’s favorite heiress, Madame D (Tilda Swinton) croaks, Gustave and Zero become partners in a caper that involves protecting a priceless painting from Madame D’s venal relatives (e.g.: an odious Adrian Brody) and satellite henchmen (e.g.:  a ghoulish Willem Dafoe). Also involved: the lovely young baker (and Zero’s paramour) Agatha (Saorise Ronan), a nervous lawyer (Jeff Goldblum), A Nazi-ish constable (Edward Norton) who signals ominous political clouds, a secret society of hoteliers (Bill Murray, many surprise guests), and a supporting cast so extensive that listing them could finish this review.  (I won’t even mention the film’s labyrinthine frame story, or who pops up in that.) Anderson has collected a repertoire of actors like a rolling ball of lint; managing them all could be a traffic jam, but he exhibits a deft touch.

I have just described the plot in so many words. Other words that can describe the plot: busy, manic, frantic, joyous, zany. The whole film is pitched at a comic level so madcap that you could easily imagine the Marx Brothers running around the Budapest’s lobby, and they would be welcome companions with the numerous other films that Anderson gently references in the film. He also references film itself: as he zips between numerous time periods, the movie’s aspect ratio changes. The 1930’s action—the bulk of the film—plays in period-appropriate Academy Standard  (squarish), and the widescreen opens up as we move closer to the present.

The film has just plain a little bit of everything: James Bond-esque ski slope chases, nightmarish prisons, treks across cold and portentous countrysides, gunplay, jokes, romance, adventure, and sudden appearances of brutal violence. There are multiple sketches of political unrest (some local, some not, all revelant), heroes who must make tough choices, and villains who earn their stripes in despicability. This is Anderson’s darkest film, especially in the way it fashions quick and decisive exits for certain characters. Tonally, this is tricky to pull off, but instead of undermining the frolicking comedy, it establishes real stakes so that the whole enterprise doesn’t become so airy that it floats away.  There is sadness and loss buried within this tale, and it is underlined. Anderson’s movies always exist in their own magical, heightened universe, but here he creates one with its own lightness and darkness, its own merciless logic. Guiding us through is the ineffable (yet realist) personality of Fiennes’ Gustave, who navigates through this madness with dizzying, (but intensely practical) agility.

What is Grand Budapest about? More than anything else, it’s a lament for a long ago age, and an earnest missive stating that civility is not only important, it’s the thing that matters most. That’s what Gustave is all about, and he represents a font of relative sanity in world that’s crumbling into chaos. He has his flaws and vices, but he stands for something. Something very important. That’s the key to unlocking Fiennes’ brilliant performance. And the movie. And Anderson’s worldview. And life, probably.