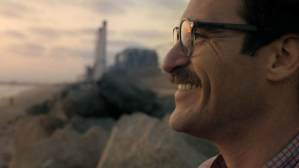 Perhaps the most emotionally relevant film of the year, Spike Jonze’s Her postulates a near future where technology is not a blessing, nor is it a curse. It’s a fact of life as steady as a companion, and one that can cherish and hurt us as much as a “real” friend can. For that matter, what is real, anyway? For Theodore Twombley (Joacquin Phoenix), “real” is as elusive a sensation as can be. He’s a recluse: timid, shy, reeling from the debris of a devastating divorce (he still hasn’t signed the papers). He works at a company where letters between loved ones are crafted by third party phonies, and perhaps inevitably he suffers from crippling loneliness. All that changes when he meets Samantha (Scarlett Johnanson), who is warm, energetic, laughs at his jokes, and just plain enjoys him. The catch: Samantha is an artificially intelligent operating system. She’s a computer.

Far-fetched? I’m doubtful. Every day our tools inch towards more plush, cozy user-friendliness, and it’s easy to imagine Samantha as Siri with a higher IQ and an attitude adjustment.  The genius of Jonze’s film—which extends from its persuasive production design, surefooted direction and remarkable performances—is how rapidly and successfully it creates a fully-realized Samantha, a bubbly and joyous personality so vivid that she neatly sidesteps questions of “real.” She is real enough. And certainly real enough for Theodore, who…I was about to say “falls in love with her.” But that’s misleading. In every way that matters, they actually fall in love with each other.

How exactly a grown man and a piece of software can engage in a full-blown romance is a question one might ask. And it is indeed a matter of some practicality: Theodore’s incompatible ex-wife (Rooney Mara) haunts his memories. In person, she is her own woman, not a shrew, one who hurts Theodore reluctantly, and only because she has hurt so long. His one flesh and blood date is a woman who is reeled in and then repulsed by Theodore being Theodore. He has one good friend in Amy (Amy Adams), who is supportive but similarly distracted. Samantha is the only one who is there for him, who is always available to talk, who centers her life around him. Of course, she’s programmed to do those things. But eventually she evolves into something more than that. And less. And more again.

The message and metaphor is clear here. Samantha is a fantasy, one akin to the same one we all have when entering a relationship. Eventually she’s supplanted by a messier, challenging reality, just as all lovers eventually are. Theodore is a cautious man, one who welcomes a technological cocoon, and his emotional retardation will remind us either of ourselves, or people we know. But a “real” relationship, even with a computer, must face challenge in order to be real, and Theodore’s grappling with that forms the emotional backbone of Her, which, instead of beating the drum of technological alienation that many sci-fi films do, offers the gentle point that we can’t escape life’s difficulties by shutting out the world—reality will find a way in, even through the most unlikely route.

But that is only one idea of many in Jonze’s brilliant, idiosyncratic Her, which is resonant in its emotions and daring in its storytelling. Jonze, who wrote and directed, also made Being John Malkovich, Adaptation and Where the Wild Things Are. He is an expert at following outlandish premises to outrageously logical conclusions, and yet bestowing them with a warmth and humanity. Despite several opportunities for archness, he never stands outside the story and mocks. Her‘s central conceit never collapses into jokiness. The couple’s fumbling attempt at lovemaking is handled with sensitivity, not irony. A later attempt to “spice up” their love life through a third party (Portia Doubleday) is executed with equal parts humor and heartbreak. Samantha continues to grow and evolve, possibly to the point of one day even outgrowing Theodore, which terrifies him, understandably. This is Jonze at his best: sincere, tender, wry, oddly poignant, poignantly odd. And he’s well-served by an unsurprisingly pitch-perfect cast, with Johansson being the headliner (and she gives a moving, deft vocal performance) but Phoenix showing the same fearless commitment that we expect from him. There are scenes here that mirror the long-take rawness that populated last year’s The Master. Adams, with the less showy role, is so good (what a year for her, by the way) that she makes it look deceptively easy. But we know it isn’t.

We spend such energy in the pursuit of love, which is something that can hurt us so much. It’s an equation a computer cannot understand. But Samantha eventually does, and later still does Theodore. And that’s ultimately one of the central points of Her: to avoid pain is to avoid growth. And growth is life, digital and otherwise.